Kefalonia And Her Northern Coves

Many of the British tourists I met come back time and time again. It’s easy to see why. In fact they top the bill as tourists ahead of the Italians and the Germans. It’s why Kefalonia is so well served by direct flights from the United Kingdom. 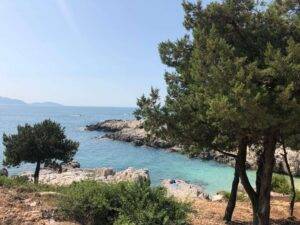 Corfu may be better known, Paxos may appeal more currently to the in-crowd but Kefalonia, I would argue, is less spoilt and has more peace, charm and authenticity.

From the airport, to reach the north of the island, I took the corniche, a scenic coastal road, to immerse instantly into the local vibe with the sea one side and tavernas the other, rather than the quicker but barren, mountainous route. As I gathered height, I could look down upon the fish farms with their nets of sea bass in front of Argostoli the capital town with her terracotta roofs that age well in their uniformity. Later on, at a vertiginous drop, I couldn’t help pulling over to get a glimpse of the glorious beach at Myrtos. It was wonderful to surrender on the road to the goats of different colours and faces that live on this route, tinkling their bells as they experience the day’s cool in the shade before the night’s heat from the tarmac.

I reached my destination, a northern fishing village called Fiscardo (for a complete guide go to www.fiscardo.com).

It faces Ithaca, the home of Odysseus, and is a yachties’s paradise. If some perhaps in the bigger boats come to see and be seen then there are no nightclubs here. It’s a place for relaxation and repose. For the reflection and appreciation of the unspoilt harmony of land and sea. They moor in the evening to disembark from a dinghy or rowing boat onto terra firma and come to dine at one of the many restaurants on they quay or to flick the hangers of the many tasteful boutiques offering beach wear and dresses as well as the gorgeous pots of flower and thyme honey and bottles of olive oil. 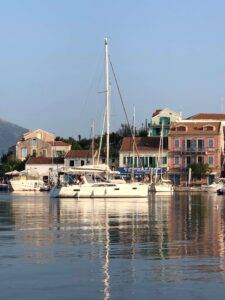 To dispel any thoughts of mosquitos I always recommend the natural Canelle Spray (www.cinnamonhill.com) that is very effective and has a cinnamon aroma far preferable to that of the citronella variety.

That night in Fiscardo I followed a signboard promoting ‘an amazing view a hundred yards on’. It took me to Panormos, a restaurant discretely tucked away at the end of the village where the tops of the boats had lights that mingled with the star-studded galaxy. Panormos is a terraced restaurant run by Anais as the latest member of a family concern. Panormos has a hip, cool vibe. The menu is trendy and modern with ‘supergreen’ dishes chosen for the palette of healthy-minded types.

A five-minute drive or twenty-minute walk from Fiscardo and perched high up overlooking the sea is the imposing, impressive façade of where I had the pleasure of staying for a week: namely the Almyra Hotel (www.almyrafiskardo.gr). It’s run with grace, charm and efficiency by the classy and educated owners Elina and her husband Polychronis and assisted by the genial and cordial Eleni and Panos. All are affectionate and tactile putting a reassuring arm around their new guests who are treated as an extension to the owner’s family. 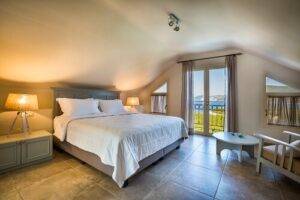 It’s a perfect boutique size: intimate, well-designed and ideal for its staple clientele of couples though typically they bring their children in August. 80% of the guests who return regularly are British so it’s no surprise that the three flags beside the driveway promote not just Greece and the European Union but the Union Jack. There’s a minibus shuttle to deliver and collect from the harbour the guests who are equally keen to have come from other routes down different beaches and coves and share their adventurous discoveries with each other.

From my hotel another day I went on a short walk down to Emblisi beach where there’s that lovely variety of coloured water from teal to turquoise and a stunning panorama of Ithaca and the mainland beyond. Just as in many seascapes sailing boats in the distance give the scene movement and here in the bay it’s peopled by garrulous women who don’t appear to draw breath as they swim out in pairs to chat away. 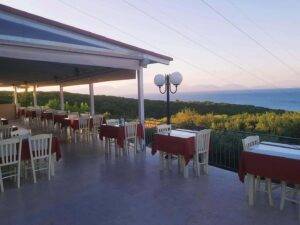 As Emblisi only has a canteen I walked back up (a healthy, but not too hardy task) to reach Mirella’s, a roadside restaurant. It’s run by the charming Sotiris who sports the broadest of smiles to cover for his ever-youthful mother working behind the scenes. With authentic white wooden tables bedecked with potted plants it boasts a truly picturesque view of the sea beyond.

Another night I had supper at one of the waterfront restaurants called Roulas. It has its distinctive floral motive with calming white neutral colours as a backdrop. The lovely elephant breath, warm mid-grey exterior is extremely elegant as are the white chairs, tables, shutters and windows with their delicate Greek lacework. There was even a small shop to lure me inside beside the kitchen where the magic happens.

Next door, and for another night’s feasting, I went to the restaurant Tassia (www.tassia.gr), established in 1972 and now the oldest in the village. It’s strongly linked to the Almyra hotel as it’s run by Polychronis and his sister Tassia. The latter stands prominently in front of her own outdoor table-cum-desk reviewing her list and managing matters like a conductor with her score. Each night is a performance as she busily coordinates and orchestrates. She’s the local celebrity having written two recipe books on Kefalonian dishes promoting exotic delights such as kidonopasto (a quince pâte) and barboule (caramelised almonds). 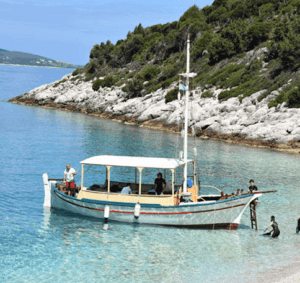 For a wonderful full day’s excursion I strongly recommend a boat trip with Ionian Discoveries (www.ioniandiscoveries.com). Having stood on the shore for several days admiring and envying those out at sea, what better than finally to come aboard. The owner Fabio took me across the two-mile stretch of sea to Ithaca, formerly the passage for an annual swimming competition. The mountainside of Ithaca has a long white scar from the zigzagging roads. He takes people snorkelling and across the day he had pointed out to me grey and white herons, a school of baby grey mullet, turtles, cormorants, octopus and starfish.

Like all the other Brits I must go back. Whenever but soon!

Adam Jacot de Boinod was a researcher for the first BBC television series QI, hosted by Stephen Fry. He wrote The Meaning of Tingo and Other Extraordinary Words from around the World, published by Penguin Books.

Adam had support from Heathrow Express (www.heathrowexpress.com) and reached Gatwick Airport via Southern Railway (www.southernrailway.com) as well as from Holiday Extras, the market leader in UK airport parking, hotels, lounges and transfers, and Holiday Extras aim to find you a hotel and parking package that’s cheaper than the cheapest airport parking on its own (on two week breaks). To book the Hilton at London Gatwick Airport, visit HolidayExtras.com or call 0800 316 5678.