Kefalonia and her Southern Shores 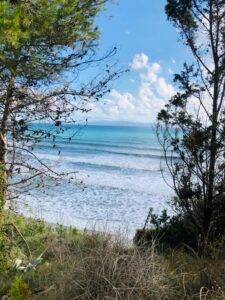 Many scholars consider Kefalonia Odysseus’s real home as opposed to the legendary neighbouring Ithaca. Certainly the island is named after Odysseus’s great-grandfather. And certainly Kefalonia is very much at ease with its providence. Local life presides over the touristic giving it a languid timeless vibe. The men, in true Mediterranean tradition, sit about in their cafés, garrulous and gesticular, putting the world to rights. One shepherd complete with his crook and sheepdogs was herding his flock of two hundred at sundown with the sound of their bells chiming in the breeze. A pure and perfect setting of pastoral harmony.

Such was her magnetism that within two weeks I was lured back to this enchanting island. This time to the southern half, beneath her mountainous ridge, her bays of golden sand and her view of the neighbouring island of Zante.

For the island is blessed, of course, for the majority of the year by the warmth of the virtually guaranteed sun, the clearest of vistas across the water and the cleanest of golden sandy beaches along this southern coast where the land and sea compliment each other like two knights on a chessboard.

I hired a car from Rentcarkefalonia (www.rentcarkefalonia.gr/en) run by the charming Apostolis. Their greatest asset was my being able to get away instantly from airport interiors and queues and literally a minute’s walk away down a lane with trees and I was already experiencing the warmth and nature that was to set the tone for my journey ahead.

Within twenty minutes I had come to where I had a wonderful time staying at Villa Rosa (www.villa-rosa.com.gr), Started in 1997 and owned by the Georgatou family, it’s a select and classy set of self-catering holiday homes. Not only has it been fashioned in a highly tasteful way but it’s extremely good value. My experience echoed the positive comments in the visitors’ book. The interior is super-clean and fresh and decorated with rattan and wicker baskets throughout and other creative and welcoming touches.

Outside are balconies at every angle from which to catch the sun or look out to the beautiful sea beyond. Set in a spaciously landscaped garden with a lush lawn that’s indulgently spongy underfoot are fruit trees, palm trees and flowers, all leading to a swimming pool and poolside bar. 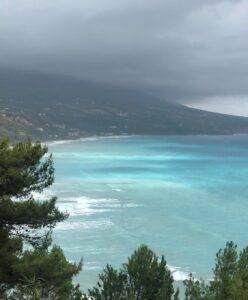 From my hammock I could enjoy the coastline that’s visible as far as Lourdas beach where row upon row of unfurling waves crashed into separate bays. I found watching these waves as mesmeric as the differing colours of the water that changed from Egyptian blue to mazarine, from turquoise to teal.

From here I walked down a steepish road in reverent silence down to Denis Seaside Restaurant (www.deniskefalonia.gr). It’s the most romantic of strolls under a canopy of bright stars as I began my descent to hear and then see the waves lapping the shoreline. I chose well with one local favourite: yoghurt with thyme honey and walnuts followed by the grilled prawns. I could have all too easily had any of the desserts of orange pie, lemon brûlée or poached pear but went instead simply for hot chocolate laced with brandy.

It was to this Livatho region, as it’s known, that the poet Byron was drawn, staying at Metaxata where he used to sit on a rock and enjoy the spectacular view. His lover Lady Caroline Lamb called one morning at his apartment but he wasn’t home so she grabbed his book lying on the table and wrote ‘Remember Me’ on its first page prompting him to respond with his two verses ‘Remember Thee’ in a somewhat bitter rejoinder.

I went another evening to Lourdas beach, one of the key attractions of this southern coast. How good it is to be somewhere that attracts tourists but is still under-developed, where prize plots of land are still allotments not high-rise buildings, where it’s all still based around local life. To dispel any thoughts of mosquitos I always recommend the natural Canelle Spray (www.cinnamonhill.com) that is very effective and has a cinnamon aroma far preferable to that of the citronella variety.

I came to Lorraine’s Magic Hill (www.lorrainesmagichilllourdas.com). It’s a restaurant that opened in 1999 thanks to the inspiration of Peter and Lorraine Fragiskatos. Lorraine, my charismatic and very welcoming host is part Austrian, German, Greek and American. She originates from a colony of the Hutterian Brethren in Montana that she left at the age of eight. And, her passion is evident in her professing that “if you love what you are doing it shows”. And indeed the food from her Magic Hill comes either from the sea or the restaurant’s organic gardens and its allotment.

Back up the top of Lourdata is a strip of restaurants and other touristic attractions where the versatility of the locals is highly admirable as I met Marinos, very evidently the local fix-it man, owning not just his Captain Zorbas restaurant, with its wonderful upstairs veranda, but a couple of villas, a rent-a-car firm and even offering donkey rides.

Along this strip is the restaurant La Mer (www.spyridoula.com/index.php/la-mer-restaurant).

This family concern, run for 24 years by Andreas and Makis Markantonatos has a successful formula that’s reflected in the generations of family photographs that adorn the walls. It pulls on its history and took me back in time as it’s traditional, even alpine, feel is expressed by the wooden floors and beams. 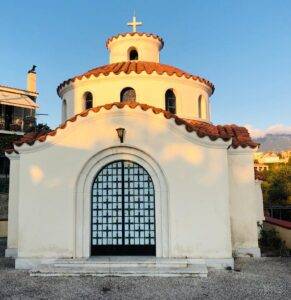 Tucked away at the end of the road from the other restaurants on the strip is Chefalonia. It’s just opened this year and is another family-owned concern with the father as the chef, one son in the kitchen alongside another serving the guests. Indoors it’s expansive, fresh, light and airy, modern yet timeless. The décor consists of white wooden decking with lights made from bamboo sticks that move gently in the breeze. Here I enjoyed a delicious vegetable moussaka and a traditional Corfu recipe of Beef Sofrito.

My advice for all purses and groups: be you couples or families is enjoy the stretch from the airport to Lourdata. For beyond are the ports of Sami and Poros and the resorts of Katelios and Skala where the hotels, villas and apartments are less lovingly composed, the beaches less golden and the water less swimmable. April and October, the two bookends of the season, are the ideal times to go when it’s not too hot and yet is wonderfully peaceful.

I must go back, whenever but soon!

Adam had support from Stansted Express (www.stanstedexpress.com) and reached Gatwick Airport via Southern Railway (www.southernrailway.com) as well as from Holiday Extras, the market leader in UK airport parking, hotels, lounges and transfers, who aim to find you a hotel and parking package that’s cheaper than the cheapest airport parking on its own (on two week breaks). To book the Hilton at London Gatwick Airport, visit HolidayExtras.com or call 0800 316 5678.