The lure of a ‘pukka’ cuppa for the 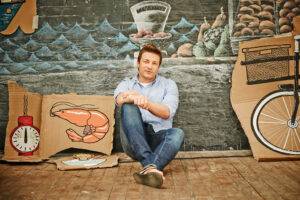 Jamie Oliver has never been far away from cafe culture, of sorts. His big break as a culinary master came in 1997 BBC documentary River Cafe – the then 22-year-old sparring as a sous chef amidst the chaos of one of the River Thames’ most seductive locations. While that Hammersmith base remains, Oliver quickly flew the nest on the back of his phenomenally successful Naked Chef series, going on to influence a multi-generation swoop of food lovers and, quietly, amassing a £250million fortune in the process.

But Oliver takes it all in his stride. The patter, the demeanour, the bravado is the same as it ever was. Okay, he may say “pukka” a little less in 2021, but then, thankfully, so does everyone else!

“The River Cafe was a big thing for me. The place itself gave me a fantastic practical foundation in food, but obviously the TV project gave me the greatest launch pad anyone could hope for.

“It has been an exciting journey, through subsequent series, books, restaurants; and national campaigns that have ranged from healthy eating to helping the disadvantaged.”

So we’re speaking to someone who is ultimately content…?

“Oh no, never,” he retorts. “There will always be another project, always another challenge. That’s what keeps me going – that’s what keeps most of us going. If I want to relax I’ll spend a bit of time with the kids, walk around the garden, or drink some red wine, but I couldn’t do that all the time.”

Jamie’s passion for his children knows no bounds though. The family comprises wife Jules, Poppy, who is 18, Daisy Boo, 17, Petal, 11, 10-year-old Buddy, and River, four. 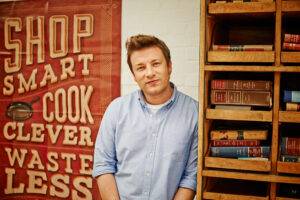 “Sky-diving and kids represent my two biggest fears in life. One of those I can probably protect against harm, while the other is a little trickier, although if I stay out of the sky I’ll be alright. But my kids do mean everything to me. As time goes on they gain an understanding of what you do and who you are, but they are evolving all the time. It’s a fascinating ride.”

Away from home life, Oliver’s pursuit of continued culinary excellence has been thwarted by the global pandemic. He looks forward to normality returning at some point in 2021, and we all agree it will be overdue.

“It’s one of those things. You can’t expect everything to go to plan, and I’ve got enough to be happy about and to occupy me. And it’s all about the ride. I think we’ll always be learning a lot from each other; life is a natural progression for me.”

The lockdown has at least give the ever-ambitious chef a chance to repackage some of his business ideas… he’s also found himself reigniting a passion for coffee!

“When I launched it many years ago my tea and coffee crockery range was designed to embrace the flavours, smells and moods of what those drinks are all about. I’ve inadvertently stepped away from that, but it’s something I want to connect with again.

“The drive towards coffee, in particular over the past two decades, has been absolutely incredible. More than any other industry it has been reinvented and repackaged, and now, as a global consumer entity, we love our coffee shops, to the extent that we dare ourselves to replicate what they offer at home, which is fantastic.

“Despite my love of wine and the way it totally has the power to transform food, I admit you’d still have one hell of a battle on your hands to swap me a glass of red wine for a cup of coffee!”