A retired engineer has told how his voluntary work with the charity Dogs for Good helped him to cope with the pain of losing his wife and living alone through the pandemic.

Gerry Bernardo (75) from Banbury has been a temporary boarder with Dogs for Good for ten years and he’s now looking after his 50th dog for them.

Dogs for Good creates life-changing differences for people living with a wide range of disabilities and conditions including autism, physical and learning disabilities and dementia, through the help of an expertly trained dog. The charity’s assistance and community dogs enable people to live more independently.

This Volunteers Week, the charity is saying thanks to the volunteers whose essential work of fundraising, looking after and driving dogs, enables them to change people’s lives through the power of dogs.

Gerry’s wife Heather died from Alzheimer’s Disease nearly two years ago. They had been married for 50 years. He has two grown-up children and four grandchildren but he’s not been able to see them during the past year due to Covid.

Gerry explains: “I started to feel alone when she was still around because I gradually lost her as her illness progressed. She passed away in a care home four days after our 50th wedding anniversary and three days before her 75th birthday. It was a very difficult time to lose her. 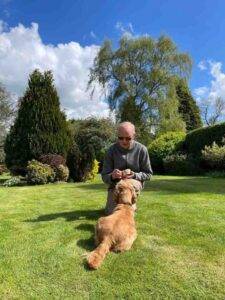 “It was a really bad time for me emotionally but the dogs don’t have any views on things like that, they are always the same, so it was great to have them and they really helped me.

“I don’t think I could have coped without a dog. Having the dogs has also been particularly good during Covid when often I’m not seeing anyone else all week, they are brilliant companions.”

Temporary boarders look after a dog for a short time while they complete their formal training and the dogs are usually aged around 14 – 20 months old. Gerry’s currently looking after his first cocker spaniel for the charity, a 20-month-old called Esther.

He said: “Esther’s a lovely dog, like all the dogs I care for she has a lovely personality. Like many spaniels she is quite interested in the birds and the squirrels that we meet in the park at the moment, but her expert trainers are working on this to ensure her success as an assistance dog.”

“I don’t train the dogs, the charity’s experienced trainers do that, but I do assist in their training for example, I’ve been helping Esther to establish a good toileting routine and I maintain things she’s already learned such as sitting at kerbs and waiting at doorways. 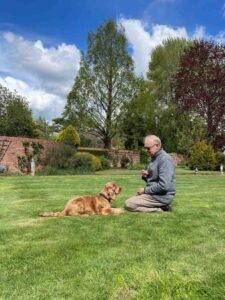 “Temporary Boarding is a great way to help the charity and have a dog in my life without the commitment of a full-time dog. If I’m unable to board a dog for a period of time the charity has other volunteers they can call on. They have a brilliant attitude and that’s why I like working with them because you never feel forced into anything.

“All the people I’ve known over the years at Dogs for Good have such a lovely way with the dogs and the volunteers and I really feel part of the bigger Dogs for Good family.

“I feel privileged to be part of their team and to play a part in helping these dogs go on to transform people’s lives.”

Liz Stone is Dogs for Good Volunteer Coordinator, said: “We have volunteers who go out in all sorts of weathers to fundraise for us, people who transport dogs or resources by driving for us and of course all the volunteers who socialise puppies or board dogs in training and other Dogs for Good dogs and provide them with a loving home.

“Quite simply, our work would not be possible without their support and in the last twelve months so many of our volunteers have had to learn new skills or have been asked to work in different ways because of the pandemic, so this Volunteers Week, we want to say a huge thank you to them for everything they do.”