If you had visited the quaint Oxfordshire village of Great Rollright in 1945, you might have spotted a thin dark haired and elegant housewife emerging from a stone farmhouse called The Firs and climbing onto her bicycle. However, she was not pedalling towards the shops with her ration book, she was going out into the Oxfordshire countryside to obtain top secret scientific information from a nuclear physicist. This would prove essential to the rapid development of the Atomic Bomb by the Soviet Union.

She had three children, and a husband, Len, who worked in the nearby aluminium factory. She was friendly but reserved and spoke English with a faint foreign accent. She baked excellent cakes and neighbours in the Cotswolds knew little about her. They did not know that the woman they called Mrs Burton, was really Colonel Ursula Kaczynski of the Red Army. A dedicated communist, a decorated Soviet military intelligence officer and a highly trained spy who had conducted espionage operations in China, Poland, and Switzerland. before coming to Britain on Moscow’s orders.

They did not know that her three children, each had a different father nor that Len Burton was also a secret Moscow agent. They were unaware that she was a German who had spied against the fascists during the Second World War, and was now spying on Britain and America in the new Cold War. They did not know that in the outdoor privy behind The Firs, Mrs Burton had constructed a powerful radio transmitter tuned to Soviet intelligence headquarters in Moscow. She was born Ursula Ruth Kuczynski, in 1907, into a Polish Jewish family in Berlin, joined the German Communist Party at 19 and was then recruited by the Soviet Union’s military intelligence service.

In 1937 the Soviets awarded her the Order of the Red Banner for her espionage work in China, so she now held the rank of colonel in the Soviet military without ever wearing a uniform. She came to Britain on Moscow’s orders and lived a double life, running a perilous spy operation while also being a housewife and a loving mother of three.

The family settled in north Oxford, but soon moved on to the first of a succession of nearby villages, settling firstly  in Glympton near Woodstock where she rented a room in the vicarage, and then in Kidlington. In May 1945 the Burtons relocated again, to a larger house The Firs in the north Oxfordshire village of Great Rollright. where they remained until 1949-50, becoming so integrated into the village community that both her parents, are buried in the Great Rollright churchyard. 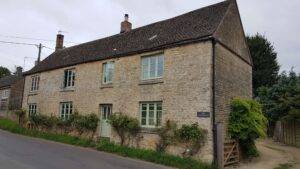 It is thought that this area was chosen as it was close to the United Kingdom Atomic Energy Authority at Harwell. Highly trained she was acutely aware that in order to succeed, avoid suspicion and being detected, spies needed to be fully integrated into the local community.

Village life revolved around the pub, the twelfth-century church, the cricket club, local gossip, the harvest and the annual fete. Ursula embraced all of this and although she remained a staunch Markist atheist, the family seldom missed church at St Andrew’s on Sunday, usually sitting at the front and listening intently to the sermon. The bell ringers frequently came for tea and her excellent scones after Sunday service.

She regularly cycled to Overthorpe Hall near Banbury to rendezvous with Karl Fuchs the brilliant expat German physicist working on the UK’s atomic research project, who would release details of nuclear research to her for passing on to the Soviets thus speeding up their own Atomic Bomb development programme. In 1947, MI5  twice visited Ursula and Len  in Great Rollright, as suspicions grew about Fuchs, but each time they  could not bring themselves to believe that a housewife, who baked such wonderful scones and cakes, could be a Soviet secret agent. When Fuchs was unmasked and put on trial in 1950 Ursula left for East Berlin the day before the trial began.

She told her Soviet minders that she wished to retire and amazingly they allowed her to do so and she settled down to a new life as a popular novelist. She died in Berlin in 2000, aged 93, and remains one of the most intriguing figures in the world of espionage.

Ben Macintyre Britain’s most acclaimed historian has written Agent Sonya the true story of this legendary secret agent , a woman who influenced the course of the Cold War and helped plunge the world into a decades-long standoff between nuclear superpowers.