Drink and be Merry

Given that the human boy is almost two thirds water, it should come as little surprise that keeping ourselves adequately hydrated has such a positive effect on how we perform, function and interact. Indeed, just a two per cent drop in total fluid levels will see our body efficiency begin to plummet, and the further we slip into a state of dehydration, the more profound the effects.

We’ve all been there – that dry, sluggish feeling where you struggle for energy and inspiration.

It’s the reason why we can go for over up to three weeks without food, yet just three days without water will mean serious medical attention is required.

So, that’s the science behind the importance of staying hydrated, yet with the usual mass of mixed messages emanating from scientists, health experts and mainstream media, who are we to believe when it comes to the quantity of water we need each day.

The World Health Organisation suggest that drinking two to three litres of H2O every day gives the human body what it needs. And this level increases – up to four litres – for people working in hot climates or involved in performing physically active jobs or tasks.

While this may initially seem an non-quaffable target to hit, by breaking consumption, it’s possible. 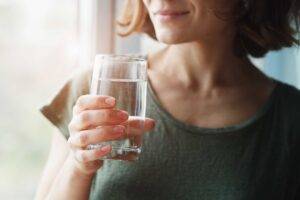 The UK – a hydrated nation?

Given we’re an island nation, our respect for water and all its benefits remains poor! Incredibly, only 11 per cent of the UK population are said to be hitting the target of two to three litres per day, the rate that allows our bodies to reach optimum hydration.

Why is this? Well, the realities of busy lifestyles, diets high in salt and a desire to reach for drinks that are diuretics (such as coffee, tea and alcohol – all of which dehydrate you further) means we’re failing to provide our bodies with the liquid fuel it requires. The results are tiredness, mental fatigue, lack of concentration, headaches, constipation and low moods.

Fitness apps and drinking bottles with in-built counters to help you keep track are two great ways to ensure you stay hydrated.

If working from home, fill up a one litre bottle and drink from your desk at regular intervals. Refilling this once, whilst additionally having water with meals, will see you hit your target.

And remember, when out and about, it’s a legal requirement for pubs and cafes to serve tap water for free.

Consider too, the brain won’t send out a signal of thirst until you’re already dehydrated. Put another way, if you find yourself consistently thirsty throughout the day then it’s time to put a proactive plan in place to prevent your body falling into that state. 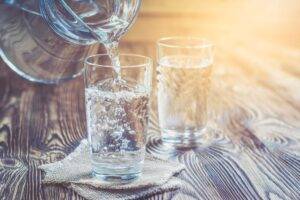 This is an idea popularised in the States, which simply suggests filling eight 8-ounce glasses. Do that and you’ll succeed in moving past the two-litre target.

However, recent research by the U.S. National Academies of Sciences, Engineering, and Medicine suggested that sipping water constantly throughout the day is much more effective in replenishing the body than glugging huge quantities at a time.

Not only does a gradual intake allow the body to process water better, and make more efficient use of it, but it’s been scientifically proven that this absorption process will actually reduce trips to the bathroom, compared to the ‘boom or bust’ process of not drinking anything for a few hours then taking on board lots of water at once.

Water as a weight loss tool

We consider the prime benefits of water to be in preserving mental and physical strength and clarity, but drinking water before meals has been proven to be a significant weight loss tool.

Simply, water fills the stomach, suppressing appetite and encouraging us to leave more on the plate. 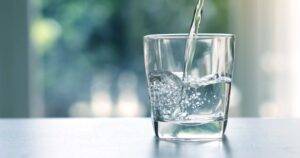 It may sound like a made-up term, but it’s real, as are the effects. While all the positive benefits of drinking plenty of water speak for themselves, be careful not to overdo it.

Drinking too much can lead to a dilution of electrolytes – such as sodium, potassium, chloride and magnesium – in the bloodstream. These are effective in keeping our muscles contracting, the nervous system performing as it should, and our body’s acid-base levels in check.

Weakness, dizziness and fatigue are symptoms of having overhydrated, and although our kidneys will very quickly work to expel excess water, overhydration is a condition you’ll want to avoid!