Hearing aids could protect against Dementia

Hearing loss is known to increase a person’s risk of dementia, but new research demonstrates that using hearing aids for hearing difficulties can protect against the condition.

An international team of scientists has found that people with mild cognitive impairment who use hearing aids have a significantly lower risk of developing dementia and experience a slower cognitive decline.

The new paper, published in the journal Alzheimer’s & Dementia: Translational Research & Clinical Interventions, is the first to investigate the link between hearing aids and progression to dementia in individuals with mild cognitive impairment (MCI).

The researchers analysed a sample of more than 2,000 people over the age of 50 with hearing loss, whose cognitive status ranged from MCI to dementia.

MCI involves decline in cognitive abilities greater than normal age-related changes but not severe enough to meet diagnostic criteria for dementia. Many individuals with MCI do not progress to dementia and may even regain normal cognitive ability. 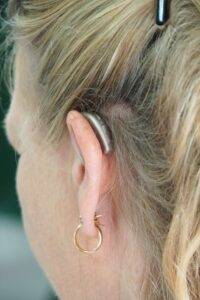 Dr Sarah Bauermeister of the Oxford University-based research organisation Dementias Platform UK, who co-authored this new study, said: “Our results clearly suggest that the use of hearing aids is independently associated with a decreased risk of a dementia diagnosis for MCI patients.”

“Gender, socioeconomic factors and cultural influences all play a role in the use of hearing aids. For example, we found that men had a much higher rate of hearing aid use than women.”

It is not yet known with certainty why hearing loss is associated with increased dementia risk. Potential explanations include a reduction in people’s ability to engage socially, resulting in higher rates of depression or loneliness, and/or changes to the brain associated with the impact of sensory deprivation. There is also the possibility that hearing problems require greater use of cognitive resources when individuals are engaged in listening.

“This is an important first step in triggering policy changes to encourage people with hearing loss who are at risk of dementia to wear hearing aids.

Dr Ralph Holme, Executive Director of Research at the national hearing loss charity RNID, said: “It is well established that hearing loss is associated with an increased risk of dementia, and this new research supports the growing view that the use of hearing aids may help slow its onset. Further research is needed to definitively show this, but clearly taking early action to address your hearing loss can only be a good thing. RNID is helping to fund vital research to understand why hearing loss and dementia are linked.”

Francesca Oliver, Audiology Specialist at RNID, said: “This important research adds to the growing body of evidence on the link between hearing loss and dementia. There is strong evidence that already shows hearing aids improve people’s wellbeing and are clinically effective, and this research further highlights their potential additional benefits. However, many people still delay seeking help for their hearing loss. This research could strengthen the case for introducing hearing screening within the NHS Health Check, which RNID has called for. Furthermore, this research emphasises the need to ensure hearing aids are available to all who need them, as access to NHS hearing aids is restricted in some parts of England.”

RNID (the Royal National Institute for Deaf People) is the national charity making life fully inclusive for deaf people and those with hearing loss or tinnitus. Together, they campaign for an inclusive society. We connect people to practical advice and pioneer new treatments for hearing loss and tinnitus.